A letter to Adam Lallana

A couple of days after Jack left us I was rummaging through his computer and came across a partially written email to Adam Lallana, an English footballer who plays for Liverpool, my club. The letter had a number of errors but given the increasing mental challenges Jack was dealing with as the disease took its awful toll, I was surprised that he got even this far.

Jack’s unfinished email to Adam Lallana (and he died before the email was sent):

My father has been helping me tremendously since I got diagnosed with brain since and I can honestly say that the only reason I have survived over 12 months is because of him. I have a frame at home but would love to get one of him signed or written anything. I don’t want to be a bother. I think he would really appreciate it, just as much as I appreciate what he has done for me to fight and live this disease. To have been given only 4-5 months at most to live and to have survived 14 months so far I consider a miracle.

We have a signboard at home.

He was of course a Steven Gerrard favourite fan (and still is)!

(Adam Lallana T-shirt when I got diagnosed with Cancer. Signed?)

Jack Fleming and my 5 brothers and mum! We have been keeping this a secret.

I am a Liverpool tragic and a passionate supporter of Liverpool Football Club (in the UK). Adam Lallana was my idol and, until the 2017 season, I regarded him as one of the best technical players in the English Premier League. That season however he was injured and got very little game time. He was also ruled out of the England side for the 2018 World Cup due to injuries but prior to that was regarded as one of the top England footballers. I was a big fan and Jack knew that when he was well but I was surprised that he retained that memory at the very late stages of his disease when this email was written.

I wrote to Adam and attached a copy of Jack’s unfinished email to him and explained that Jack had died before he sent it and I, as his father, was finishing what Jack was unable to do. I said I will let him respond in any way he saw fit although I didn’t expect a response.

Adam wrote back (his letter was undated) and I received his response in July 2018 and in it was the shirt signed by Adam. I cried when I read his letter as the emotions he expressed were very personal and touching.

It was a powerful message Jack, and he felt your loss almost as much as I did.

You touched his heart. 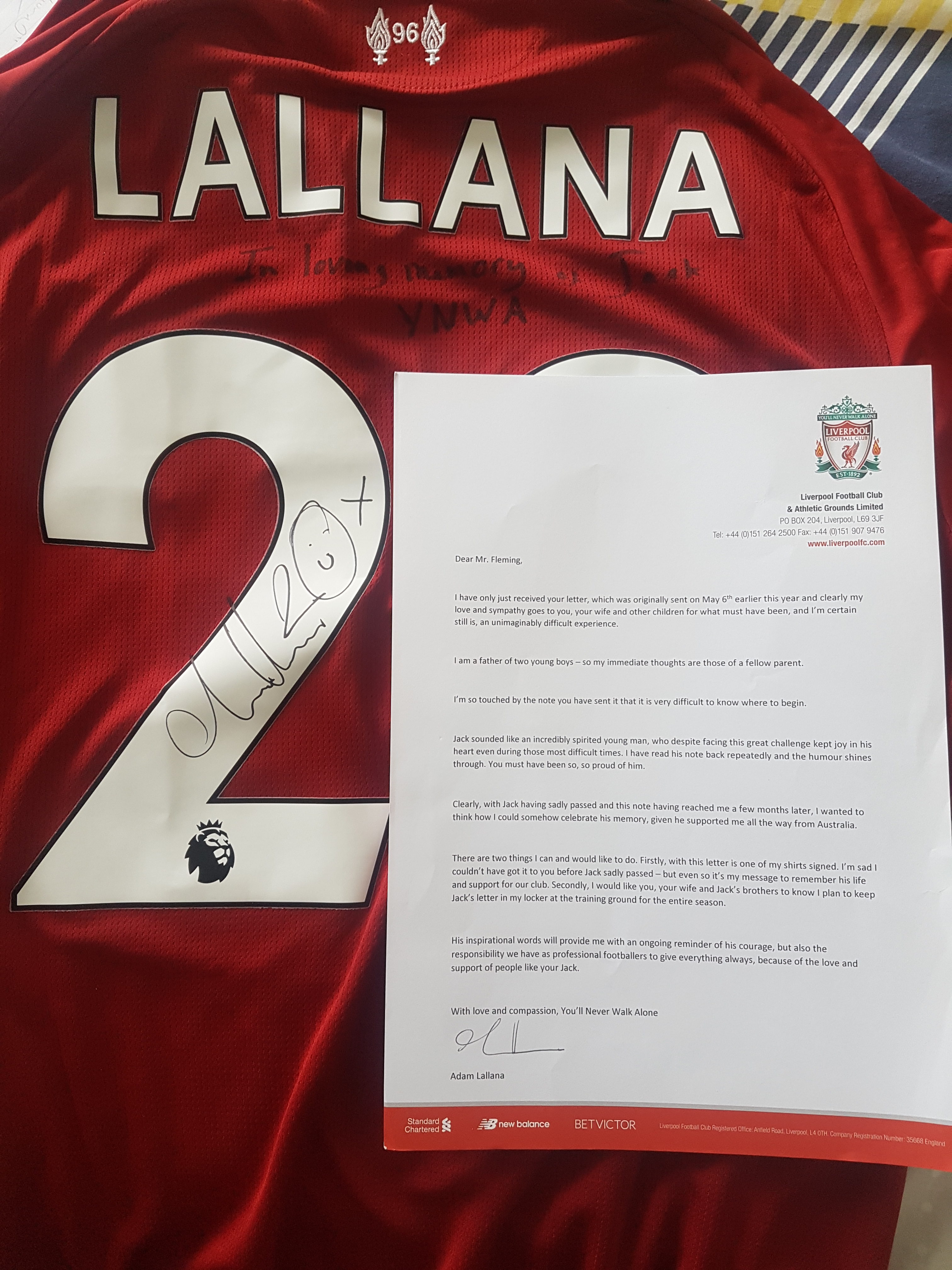 A letter from John McCain

I wrote to Senator McCain on 24 May 2018 and got a response dated 5 June 2018. I had sent him a copy of an early draft of this manuscript (Jack’s story) and his response was poignant, personal and compassionate. He was diagnosed with the same cancer (GBM) in July 2017 and I knew his time was short.

I was humbled by his response and Dianne and I were deeply moved when we read it. It is a beautiful message at a time of absolute tragedy in our lives and written by a father and a statesman that had comes to terms with his own mortality and imminent death. It was about us and I know from reading his letter that the manuscript had effected him very deeply.

Jack, you touched his heart. 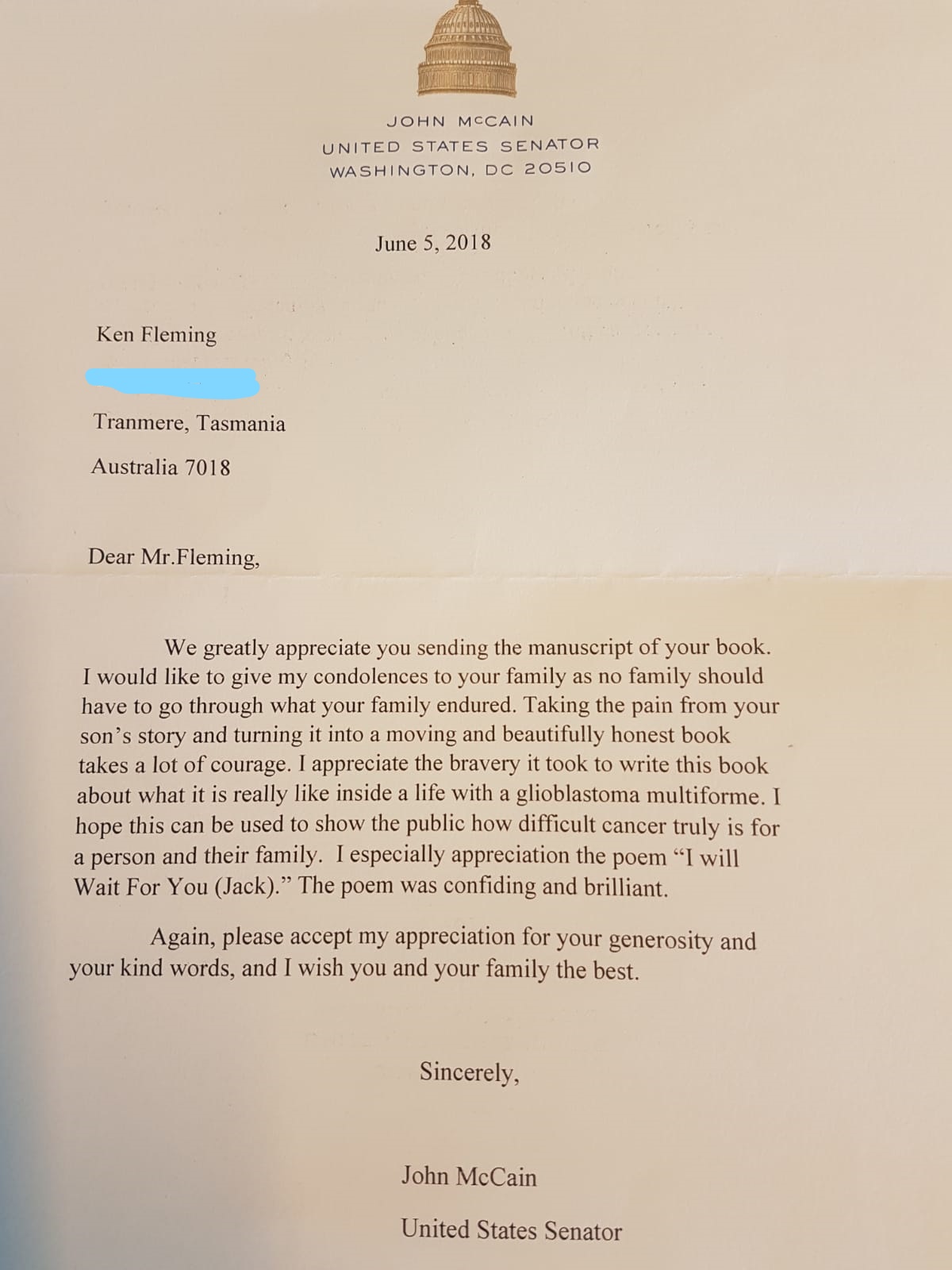